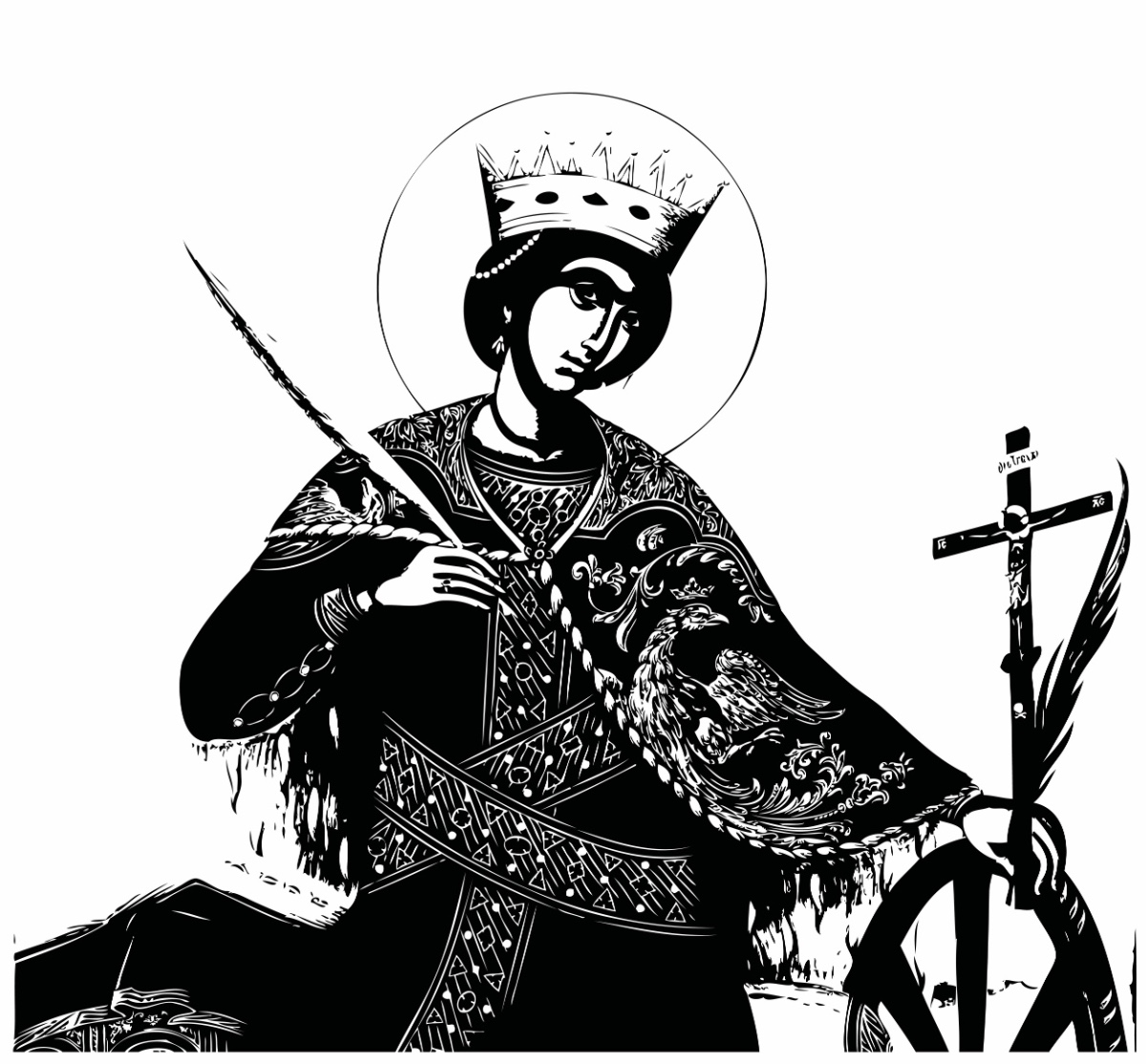 The Holy Great Martyr Catherine was the daughter of Constus, the governor of Alexandrian Egypt during the reign of the emperor Maximian (305-313). Living in the capital, the center of Hellenistic knowledge, and possessed of a rare beauty and intellect, Catherine received an excellent education, studying the works of the greatest philosophers and teachers of antiquity. Young men from the most worthy families of the empire sought the hand of the beautiful Catherine, but she was not interested in any of them. She told her parents that she would enter into marriage only with someone who surpassed her in nobility, wealth, comeliness and wisdom.

Catherine’s mother, a secret Christian, sent her to her own spiritual Father, a saintly Elder living in a cave outside the city, for advice. After listening to Catherine, the Elder said that he knew of a Youth who surpassed her in everything. “His countenance is more radiant than the shining of the sun, and all of creation is governed by His wisdom. His riches are given to all the nations of the world, yet they never diminish. His compassion is unequaled.”

This description of the Heavenly Bridegroom produced in the soul of the holy maiden an ardent desire to see Him. “If you do as I tell you,” said the monk, “you will gaze upon the countenance of this illustrious man.” In parting, the Elder handed Catherine an icon of the Theotokos with the divine Child Jesus on Her arm and told her to pray with faith to the Queen of Heaven, the Mother of the Heavenly Bridegroom, and She would hear Catherine and grant her heart’s desire.

Catherine prayed all night and was permitted to see the Most Holy Virgin, Who said Her Divine Son, “Behold Thy handmaiden Catherine, how fair and virtuous she is.” But the Child turned His face away from her saying, “No, she is ugly and unbelieving. She is a foolish pauper, and I cannot bear to look at her until she forsakes her impiety.”

Catherine returned again to the Elder deeply saddened, and told him what she had seen in the dream. He lovingly received her, instructed her in the faith of Christ, admonished her to preserve her purity and integrity and to pray unceasingly. She then received the Mystery of holy Baptism from him. Again Saint Catherine had a vision of the Most Holy Theotokos with Her Child. Now the Lord looked tenderly at her and gave her a beautiful ring, a wondrous token of her betrothal to the Heavenly Bridegroom (this ring is still on her hand).

At that time the emperor Maximian was in Alexandria for a pagan festival. Therefore, the celebration was especially splendid and crowded. The cries of the sacrificial animals, the smoke and the smell of the sacrifices, the endless blazing of fires, and the bustling crowds at the arenas defiled the city of Alexandria. Human victims also were brought, the confessors of Christ, those who would not deny Him under torture. They were condemned to death in the fire. The saint’s love for the Christian martyrs and her fervent desire to ease their sufferings compelled Catherine to speak to the pagan priest and to the emperor Maximian.

Introducing herself, the saint confessed her faith in the One True God and with wisdom exposed the errors of the pagans. The beauty of the maiden captivated the emperor. In order to convince her and to show the superiority of pagan wisdom, the emperor ordered fifty of the most learned philosophers and rhetoricians of the Empire to dispute with her, but the saint got the better of the wise men, so that they came to believe in Christ themselves. Saint Catherine made the Sign of the Cross over the martyrs, and they bravely accepted death for Christ and were burned alive by order of the emperor.

Maximian, no longer hoping to convince the saint, tried to entice her with the promise of riches and fame. Receiving an angry refusal, the emperor gave orders to subject the saint to terrible tortures and then throw her in prison. The Empress Augusta, who had heard much about the saint, wanted to see her. She prevailed upon the military commander Porphyrius to accompany her to the prison with a detachment of soldiers. The empress was impressed by the strong spirit of Saint Catherine, whose face was radiant with divine grace. The holy martyr explained the Christian teaching to them, and they were converted to Christ.

On the following day they again brought the martyr to the judgment court where, under the threat of being broken on the wheel, she was urged to renounce the Christian Faith and offer sacrifice to the gods. The saint steadfastly confessed Christ and she herself approached the wheels; but an angel smashed the instruments of execution, which shattered into pieces with many pagans standing nearby.

Having beheld this wonder, the Empress Augusta and the imperial courtier Porphyrius with 200 soldiers confessed their faith in Christ in front of everyone, and they were beheaded. Maximian again tried to entice the holy martyr, proposing marriage to her, and again he was refused. Saint Catherine firmly confessed her fidelity to the heavenly Bridegroom Christ, and with a prayer to Him she herself laid her head on the block beneath the executioner’s sword.

The relics of Saint Catherine were taken by the angels to Mount Sinai. In the sixth century, the venerable head and left hand of the holy martyr were found through a revelation and transferred with honor to a newly-constructed church of the Sinai monastery, built by the holy Emperor Justinian (November 14).

Saint Catherine is called upon for relief and assistance during a difficult childbirth. Pilgrims to her monastery on Mt Sinai are given souvenir rings as a remembrance of their visit.